Enjoying the Sunshine in San Francisco 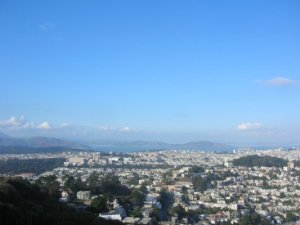 This summer has been a weird one.  San Francisco is famous for foggy weather and our best months are actually September and October when the fog rolls out.  Lately though it’s been unseasonably cold.  I’ve hardly had a break from wearing my hat for my early morning walks to work.  Last week we had a few days where it actually reached 90 degrees but then it immediately dropped down to 70.  It’s a nice day out today and will be again tomorrow but then it’ll drop down to 60 over Labor Day weekend.  Wonky weather I tell ya.

I haven’t been able to enjoy the Summer much as Hubby broke his left about 2 months ago.  Hubby was obsessively watching all of the World Cup games and analysis at that time, especially because Holland was advancing through the rounds and had a very good chance to win the tournament.  The Dutch are often referred to as the best team to have never won a World Cup.  Hopes were really high this time around.  Although being dragged out of bed at 4AM to watch a game in a bar, when we have ESPN downstairs, was a bit too excessive, I got really caught up in the game too.  There is nothing I like more than watching cute and athletic young men running around a field.  That Saturday morning, Hubby got up early and watched two games in a row.  Right after the last game, he ran out to play some soccer and within the hour I got the call that every wife dreads hearing, “The ambulance is here and they are putting your husband on the stretcher.”  It was a very bad break (he broke both bones in his right leg in two different places) which required surgery and a hospital stay longer than I expected.  He jokes that he is carrying around more money in his leg, on account of the titanium rod, than in his bank account.  Sad but true!  Until his leg heals and he is able to get around more comfortably on his own, I can only think of where we would have went this Summer.   Catch the sun while you can.